In the previous part of my note, I introduced and discussed two major features of the fiscal elements in the PIB. The aim of this exercise was to investigate these provisions in the context of how they had been presented within the Bill, and to set the ground for some of the analysis that would follow in this second part. The aim of this part of my note is to consider the other two big-ticket fiscal instruments as far as the Bill is concerned (namely the Nigerian Hydrocarbon Tax and the Companies Income Tax), and to then carry out a simplified analysis of these instruments.

Section 299 of the PIB provides for the imposition of the NHT, and this tax is payable to the Federal Inland Revenue Service (‘the Service’ or ‘FIRS’) who is responsible for the administration of the tax. The NHT, which seeks to replace the key provisions of the previous Petroleum Profits Tax Act, is one of the big ticket instruments in this regime.

The NHT rates are simple enough; 50% for onshore and shallow water areas; 25% for bitumen, frontier and deep water areas (deep water areas defined as areas offshore Nigerian waters with water depth in excess of 200 metres), as provided for in Section 313 of the Bill.

The base on which this tax is levied is the amount of assessable profits (i.e. revenues less royalties, costs and allowable deductions), and losses can be carried over to the next accounting period indefinitely, as the PIB does not clearly set limits for losses to be carried forward.

Part B of the tax provisions imposes a corporate tax on “all companies, concessionaires, licensees, lessees, contractors and subcontractors involved in upstream operations”, subject to the Nigerian Companies Income Tax Act, 2004. As is the case with the NHT, the tax is to be administered by the FIRS.

What is the CIT rate? The rate is straightforward at 30% of taxable income.

Notable provisions in the PIB include the following:

The PIB introduces the Nigerian Host Community Fund (‘the NHC Fund’) at Section 116, which is to be “utilized for the development of the economic and social infrastructure of the communities within the petroleum producing area”. Thankfully, companies are not expected to engage directly in these responsibilities which do not exactly feature as high on the priority list in their exploration work programmes. They do however have to contribute to it by way of tax.

Section 118 requires every upstream petroleum producing company to remit 10% of its net profits in this regard. Net profits for this purpose have been defined as “the adjusted profit less royalty, allowable deductions and allowances, less Nigerian Hydrocarbon Tax less Companies Income Tax”.

This is fine, until an attempt is made at crunching the numbers. A circular reference problem is inevitable. However, Section 304 might provide us with some respite. Section 304 (3) states that “The adjusted profit of an accounting period shall be the profits of that period after the deductions allowed by subsection (1) of section 305 of this Act and any adjustments to be made in accordance with the provisions of section 307 of this Act.” However, this has not quite helped. I was hoping for something simpler; more along the lines of claiming as allowable deduction over the next accounting period, the NHC Fund contributions made in this accounting period. I expect this to cause some bother, except for accountants, who may enjoy it. However, seeing as the payments are expected to be monthly, they could perhaps count as allowable deductions in the following month, for payments made in the previous month.

Section 351 of the Bill addresses matters concerning double taxation arrangements with other territories, while Section 352 sets out the method for calculating relief to be allowed in this regard. I find the provisions in this case to be fairly standard, and I will not comment further at this stage.

The chart below is indicative of the sequence of fiscal impositions on a typical new entrant. It summarises the establishment of net project profits under a simplified concession (or royalty + tax) system. 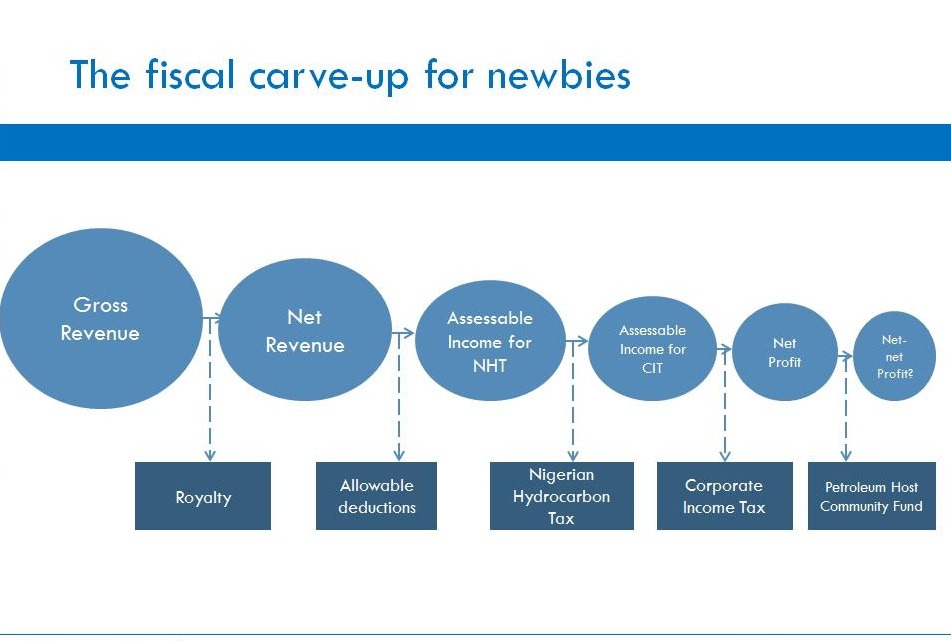 My general view is that the fiscal regime, although somewhat simpler in terms of tax instruments and sequence of imposition, does not appear to be significantly different from the current regime in terms of economic impact. This is the point where it is wise to throw in a disclaimer. I have not carried out a full scale modelling exercise of all the potential scenarios made possible by the various provisions within the PIB and the CITA, as it is not necessary for this exercise.

The table below summarises my views of the major fiscal terms included in the PIB. It is essentially a scorecard indicating my take on eight assessment criteria, ranging from clarity of definition within the PIB to fiscal progressivity. In keeping with the light-hearted approach I have taken to discussing what some may deem a boring subject and have classified the assessment scores as follows:

As an illustration of how the table works, I have been particularly hostile in my assessment of the royalties purely because the PIB does not sufficiently articulate what would apply, when and how.

I always check for specific progressive tax instruments when assessing petroleum and mineral fiscal regimes. The most common is an additional profits tax, which is normally taken off the net profits after all fiscal levies have been imposed, based on certain conditions such as attaining particular rate of return thresholds. This explains why I have included it in this table. I have also done so just so I can have a full row of “none” in the table. I remain loyal to the fun side of this exercise.

I assess both NHT and CIT to be tax neutral, as they do not appear to interfere with the flow of capital towards its most productive use. In other words, I do not see sufficient evidence in the provisions for these taxes and their allowable deductions to significantly alter the company’s economic choices.

The level of fiscal burden is crucial to the competitiveness of any petroleum fiscal regime. If it is too high, it puts pressure on the economic feasibility of marginally profitable ventures and even frontier exploration and production. If too low by international standards, it bears the risk of becoming politically difficult for a government to sustain it. This is especially so for fields considered as highly profitable, as well as mature provinces for which the geological prospectivity is well known.

Taking all the fiscal impositions into consideration, we find – on rough workings – the level of fiscal burden on the company to be around 81.3% government take. I have not compared this with the current level of fiscal burden for this exercise. In terms of international comparators such as Norway, Iran, Kuwait and Egypt (average of about 85%), this level appears to be in good company. 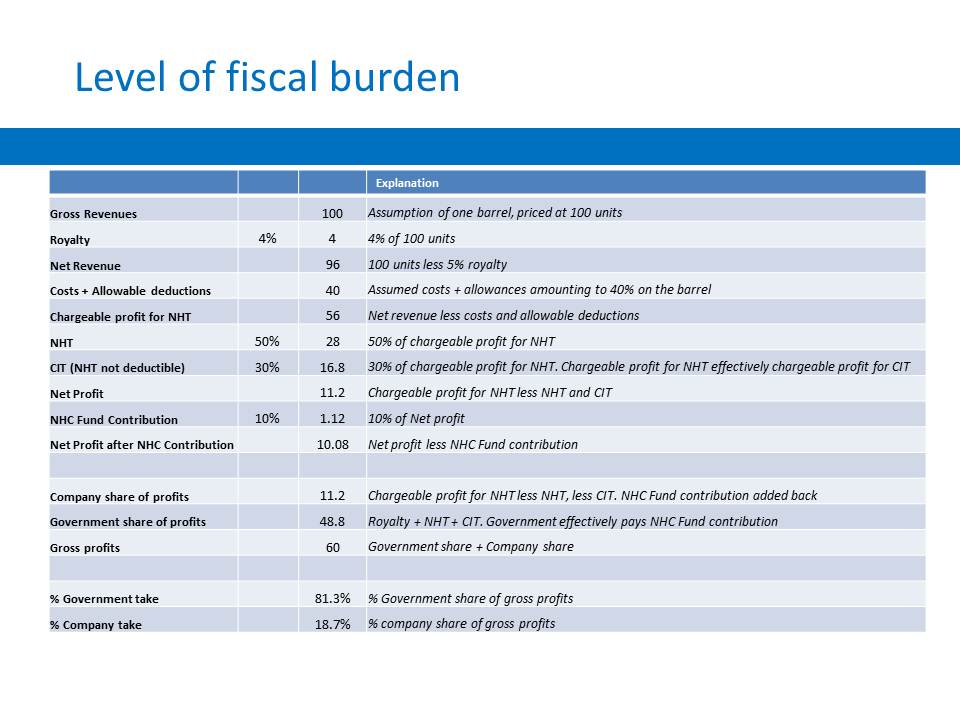 In order to improve the competitiveness of the fiscal regime, I find useful such fiscal tools as accelerated depreciation and import duty exemptions. These help to delay the incidence of fiscal burden to the latter years of the project life, and free up some cash flow for the company.

On the basis of the provisions in Section 305 on deductions allowed, my understanding is of a fully expensed capital expenditure. This has a positive implication on the payback period and the rate of return on investment.

One of the tests I carry out on petroleum fiscal regimes is to identify factors that could cause the host government to drag everybody back to the negotiation table and either rip up or revise contracts, laws or regulations. One usual suspect is the realisation that more economic rent can be captured from increased production revenues generated from an upside e.g. from sustained higher-than-expected oil prices.

If the fiscal regime is regressive, i.e. the level of fiscal burden reduces as the project becomes more profitable, chances are that a re-negotiation of terms is around the corner. If the fiscal regime is automatically progressive, i.e. there are built-in mechanisms that allow for the level of fiscal burden to react in the same direction as the level of profitability, the likelihood of contractual or legislative interruptions is reduced.

I assess the fiscal regime offered by the PIB to be regressive, as shown in the table below. Royalty, NHT, and CIT do not combine to increase government take on increased profitability. I do observe however, that the rate of decline in government take is not steep. If this fiscal regime gets reviewed by international organisations such as the IMF, this will most certainly be flagged. To demonstrate this regressivity, I have simply held costs constant from the previous table above, but doubled the price on the barrel in order to see what happens to government take. 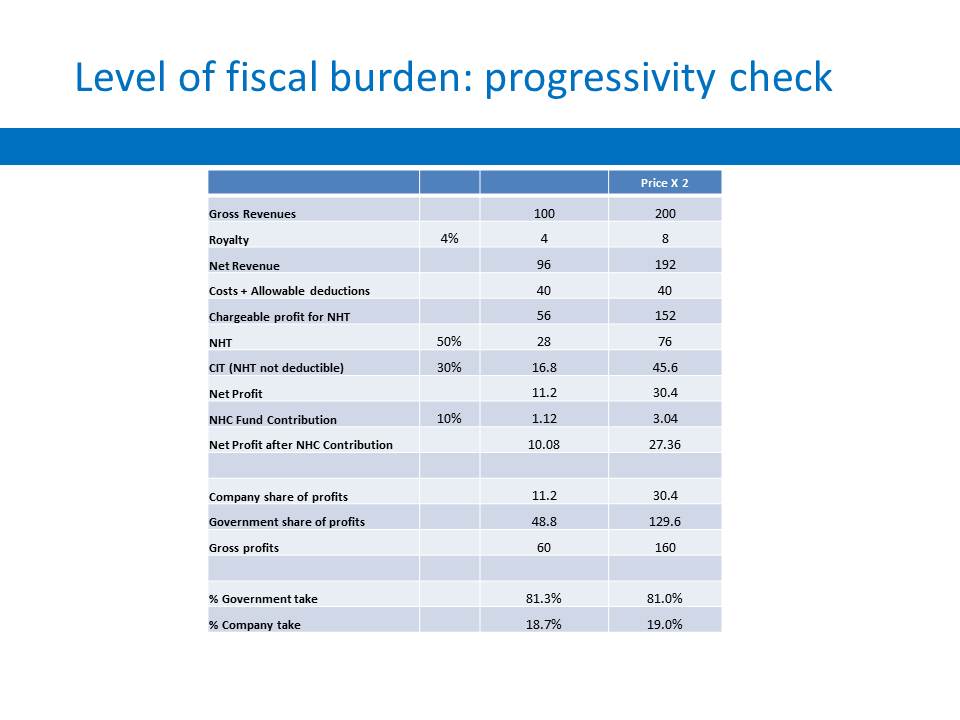 Ok, so what next?

The PIB has undoubtedly generated a fair degree of interest from existing and potential petroleum sector players alike, and will inevitably be subject to extensive discussion, analysis, debate or even dispute. What appears quite likely is that it will be passed into law not too far in the future. I feel there are a number of issues for which more reflection may be merited, such as the manner in which NHC Fund contributions are to be calculated, the beneficiaries of the GPA, or even the level of Government take. I do not rule out the likelihood of it being passed as-is(with only editorial changes), which would then imply that amendments, subsidiary legislation and regulations will follow. For now, I am excited at the prospect of debating the numerous issues that emanate from it, and the possible interpretations of these issues.

The views expressed in this Note are those of the author and not of the Commonwealth Secretariat.

Ekpen J. Omonbude is a Petroleum, Energy & Mineral Resources Economist with vast experience in policy and regulation issues. His areas of specialisation are petroleum and mineral economics and policy. He is currently an Economic Adviser at the Commonwealth Secretariat’s Special Advisory Services Division and in this capacity has advised on petroleum and mineral resources fiscal system design for several countries including Sierra Leone, Uganda, Malawi, Papua New Guinea & the Cook Islands.

Ekpen’s areas of expertise include oil and gas market fundamentals, policy, regulatory and contractual issues in mining and petroleum. He has consulted for international oil and gas companies at all stages of the value chain, international oil and gas consulting firms, financial service institutions, government petroleum and mineral sector ministries and agencies, as well as the academia. Dr. Omonbude has published several academic journal articles and delivered numerous conference papers on topical issues in petroleum and mineral resources economics and policy, ranging from oil price forecasting to benchmarking of international fiscal regimes for mining and petroleum.

One Reply to “Fiscal Provisions of the Nigerian Petroleum Industry Bill: A not so quick-and-dirty assessment, Part II”