The Petroleum Industry Bill (PIB), which has been with us in one form or the other since 2008, proposes to completely overhaul Nigeria’s petroleum industry. The current draft of the Bill, sent to the National Assembly in 2012, seeks to, amongst others, restruc ture the regulatory and commercial institutions in the petroleum industry, change the fiscal dynamics and reform the operational mechanisms of the upstream, downstream and natural gas industries.

The below article by Dr. Adeoye Adefulu and Dr. Ekpen Omonbude highlights 5 actions the incoming government may take to get oil industry reform back on track.

Given the potential impact of the Bill, its passage, at this late stage, will significantly hamstring the incoming government which has not had a chance to give its input. Indeed the current oil price crisis has changed the dynamics of the fiscal bargain and calls for a reconsideration and the introduction of flexible mechanisms to deal with any future crisis (see our point 4 below). Further, the current draft of the Bill remains controversial and it is necessary that the new government is able to take a position on its contents and implementation.

One of the hallmarks of this process has been the failure of the government to keep its promises regarding the passage of the Bill. This failure has kept the industry in limbo, with several companies delaying investment decisions due to the uncertainties surrounding the post PIB fiscal and regulatory regimes. Whilst we have indicated above that it is necessary for the new government to review the Bill, it must do so with a clear and achievable timetable. In our view, it should take no longer than twelve months to undertake the necessary research and pass the Bill or Bills (see next point). Whatever time is agreed, it is important that the government achieves its objective within that framework. This will help to bolster its credibility and reduce investment uncertainties. Our suggested timetable is as follows: 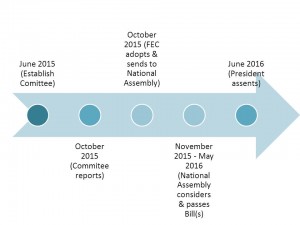 With 363 sections in over 223 pages the current draft of the Petroleum Industry Bill is unwieldy. The Bill seeks to deal with a wide variety of issues, the majority of which are only peripherally related. This has made it difficult from a political and operational perspective to manage the diverse interests impacted by the Bill. Further, a thorough analysis of the Bill will show that a number of areas, such as the proposed reforms in the downstream petroleum and natural gas sectors, have been inadequately addressed. The new government should break the Bill up into its natural segments. We suggest the industry reforms be taken under the following bills:

We believe that this approach is more consistent with the various parts of the oil and gas value chain which require varying degrees of regulatory oversight and fiscal arrangements.  It would also encourage a more thorough coverage of the relevant issues, a robust debate from the impacted stakeholders and quicker timelines in passing the reforms.

4. Reflect further on the fiscal provisions

The provisions concerning the obligation and features of the royalty regime require clearer expression within the Bill. There are 21 references to the word “royalty” or “royalties” in the Bill but nothing is stated in terms of tangible values for any meaningful interpretation or analysis. This implies that the existing royalty regime will continue to hold, subject to amendments or pronouncements in subsequent regulations.

The level of fiscal burden on new investments based on the terms proposed in the Bill amounts to about 82% in effective tax. This compares favourably with other proven jurisdictions such as Norway, Iran, Kuwait and Egypt (at an average of about 85%). However, the fiscal regime offered by the Bill is regressive and should be addressed. The combined fiscal instruments of royalty, Nigerian Hydrocarbon Tax, Companies Income Tax and other fiscal impositions do not flexibly respond to changes in project profitability. The implication is that in the event of an oil or gas price increase or a significant reduction in costs, the State will not get an incremental share of the increased revenues resulting from such positive changes to profitability. Also, there are potentially significant negative implications on investors in the event of an oil or gas price decrease as is currently the case. Therefore the fiscal system requires the inclusion of more progressive mechanisms such as rate of return trackers in order to enable automatic adjustment to changes in economic circumstances of specific projects.

One of the major drivers for energy reform in the first place was the need to address under investment in the joint ventures due to cash call deficiencies. Since one of the proposals to resolve that problem, the incorporated joint venture, was shot down after the first versions of the PIB, no concrete proposals have been put forward. Resolving this challenge should be one of the immediate priorities of the new government. Whilst this is an issue on which the authors do not agree, one of us believes that there is merit in reconsidering the motive behind the IJV structure and the specific risks it seeks to mitigate. Such an exercise will also provide an opportunity to objectively address the concerns within the originally proposed IJV structure in previous versions of the Bill such as the Board and Management compositions. We do however agree that if the IJV is to be reintoduced, it cannot be by compulsion and counterparts must negotiate the terms under which such a structure would be acceptable. In addition to this, consideration should also be given to the rationalisation of the Government stake in the joint venture arrangements through divestment of interests preferably to indigenous players.