Part VIII deals with the taxation aspects of the Petroleum Industry Bill. It is focused on “upstream petroleum operations”, which is defined under the Bill as upstream gas operations and upstream crude oil operations. These terms are further defined as the winning and obtaining of crude oil or natural gas in Nigeria by or on behalf of a company on its own account for commercial purposes and shall include any activity or operation related to crude oil or natural gas that occurs up to fiscal sales point or transfer to the downstream sector. In the case of natural gas, this includes gas treatment.

The Bill provides for the imposition of the Nigerian Hydrocarbon Tax (“NHT”) on upstream petroleum operations. The NHT replaces the current Petroleum Profits Tax (“PPT’) regime and is to be administered by the Federal Inland Revenue Service (“FIRS”). In carrying out its responsibilities, the FIRS shall be subject to “the authority, direction and control of the Minister”, although the Minister may not give orders or instructions requiring the FIRS to raise an additional assessment on a company or increase or decrease any assessment. The Minister is also empowered to make rules generally for the carrying out of the provisions of this Part of the Bill.

Chargeable Profits are the amount of assessable profits less any deductions allowed under section 312 of the Bill. Section 312 provides for deductions with respect to capital allowances and production allowances.

The Bill provides for the deductions which may be made from the profits of a company involved in upstream petroleum operations. Some notable deductions include:

(b)   Sums paid to the government in respect of customs or excise duty on machinery, equipment and goods used in the company’s upstream petroleum operations;

(c)    Interest on money borrowed where the Service is satisfied that the interest is payable on capital employed in carrying on upstream petroleum operations except in the case of production sharing contracts;

(d)   Any expenditure incurred in connection with drilling of an exploration well and the next two appraisal wells;

(e)   Contributions made to the Petroleum Host Communities Fund;

The Bill also specifies deductions that are not allowed, which include:

(a)    Any disbursement or expenses not being wholly and exclusively expended for the purpose of upstream petroleum operations;

(b)   Any expenditure for the purpose of paying penalties or fees relating to gas flaring or domestic gas supply obligation;

(c)    General, administrative or overhead expenses incurred outside Nigeria in excess of one percent of the total annual capital expenditure;

(d)   20 per cent of any expenditure incurred outside Nigeria except where such expenditure relates to the procurement of goods and/or services not available in Nigeria.

The assessable tax is 50% for onshore and shallow water areas and 25% for bitumen, frontier acreages and deep water areas.

Section 312 provides for the deduction of the aggregate sum of the capital allowances and the production allowances provided for in Schedules 4 and 5 respectively from the assessable tax.  Under Schedule 4 a company that owns an asset over which it has incurred qualifying expenditure wholly, necessarily and exclusively for the purpose of petroleum operations shall be entitled to an annual allowance as follows:

The Schedule also provides for balancing allowances and balancing charges where the qualifying asset has been disposed of by the company at a lower or higher value than the initial expenditure.

The production allowances in schedule 5 are provided according to the type of petroleum produced and the area of production. Claims by contractors in production sharing contracts in the deepwater are ring fenced per petroleum mining lease and where a shareholder holds at least 10% directly or indirectly in several companies, those companies shall be treated as one company for the purpose of computing production allowances.

The production allowances are depicted in the tables below: 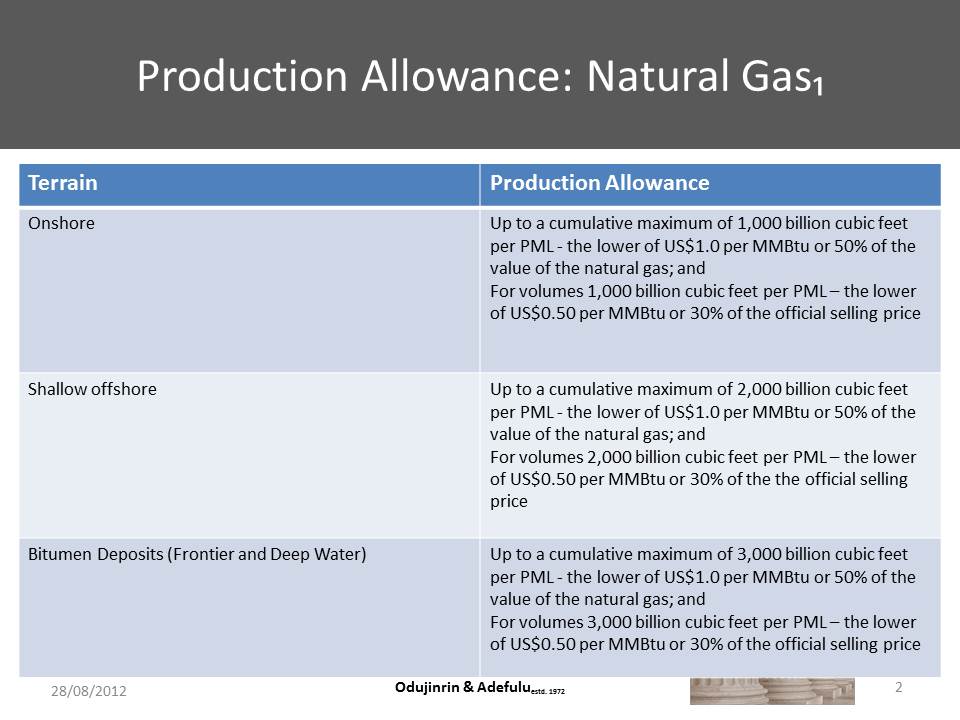 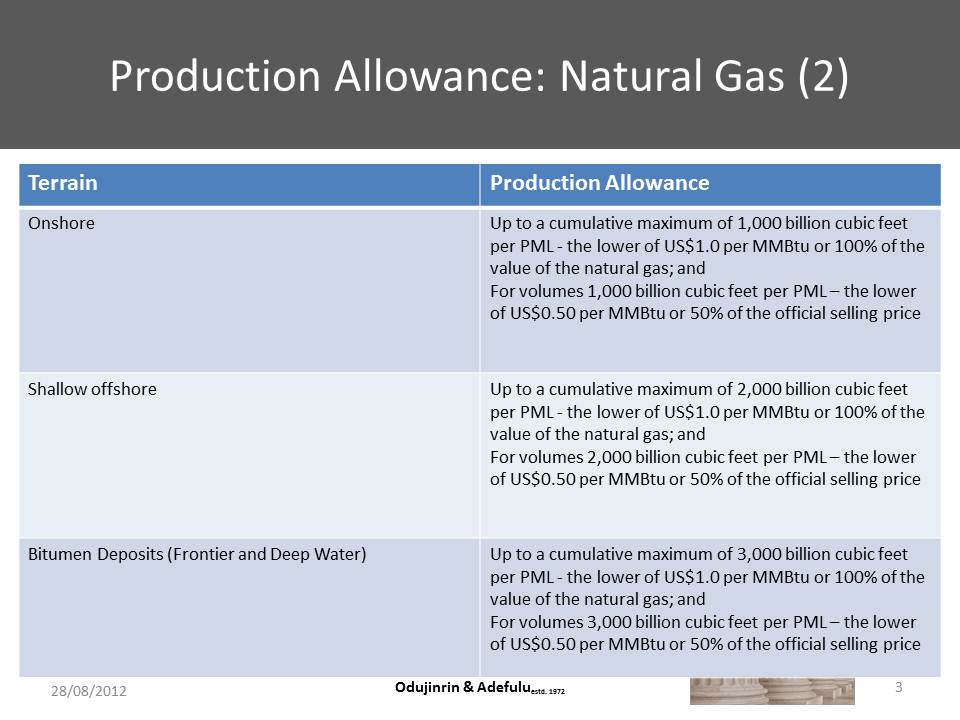 It should be noted that this table applies to natural gas fields with liquid yield less than 5 barrels of condensate per million cubic feet of gas. 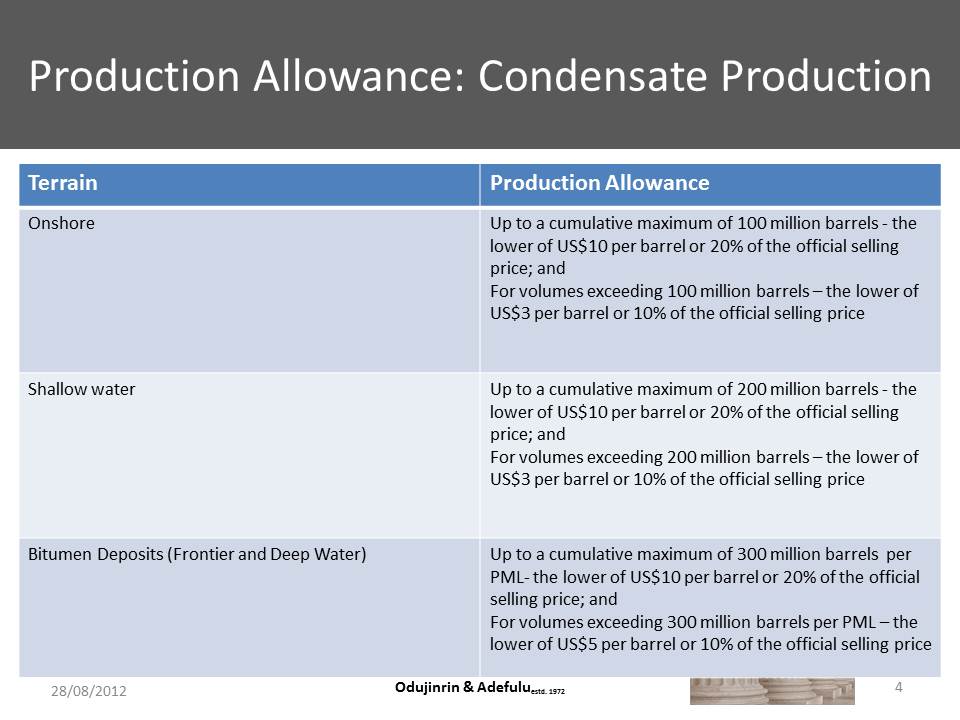 It should be noted that companies in a production sharing contract arrangement with NNPC that are not benefitting from the Investment Tax Credit or Investment Tax Allowance are entitled to a general production allowance of $5 per barrel or 10% of the official selling price for all production volumes.