The QRTs below compare the critical terms of the PML under the Petroleum Industry Bill with the current OML regime. 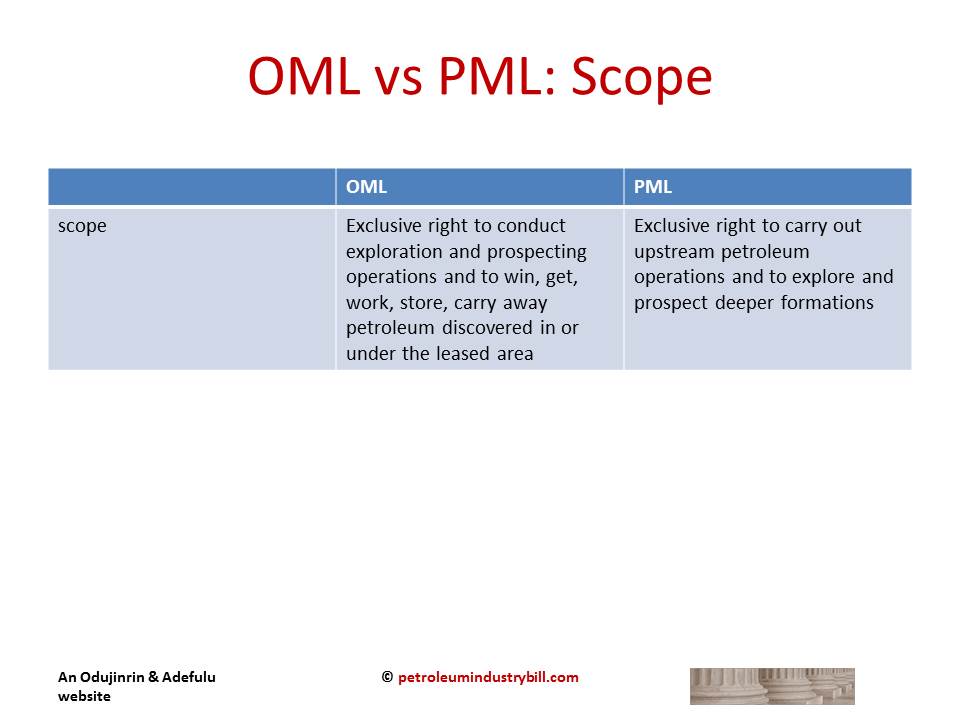 END_OF_DOCUMENT_TOKEN_TO_BE_REPLACED

The QRTs below compare the critical terms of the PPL under the Petroleum Industry Bill with the current OPL regime. 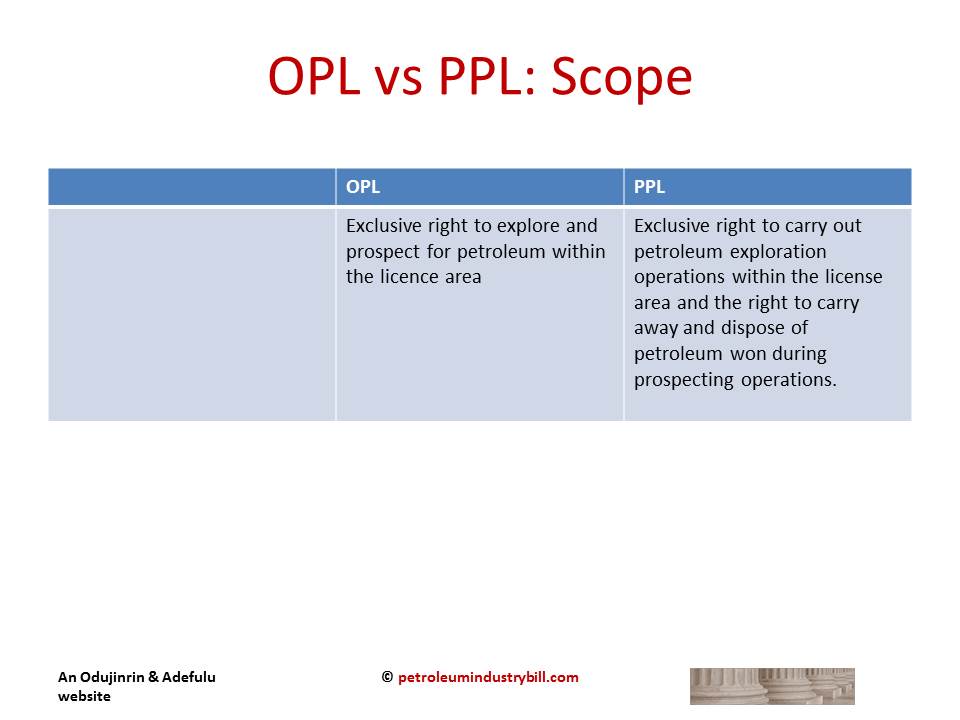 END_OF_DOCUMENT_TOKEN_TO_BE_REPLACED

The QRT below compares the PEL under the Petroleum Industry Bill with the current OEL regime. 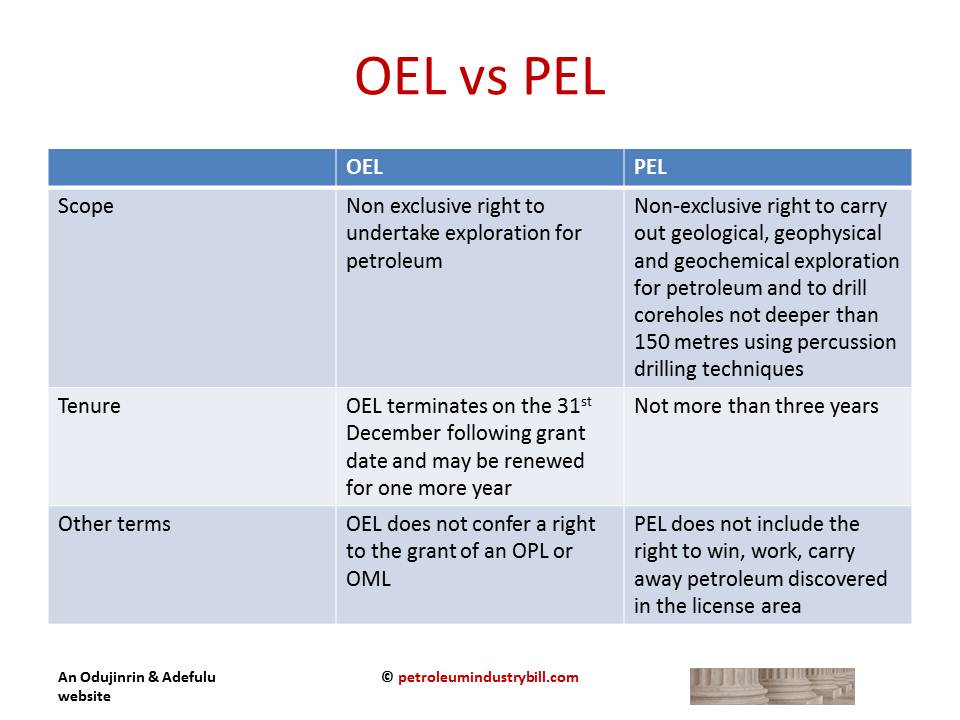 Click here for the newly published summary of Part VIII of the PIB, which deals with taxation provisions in the upstream petroleum industry.

One of the primary objectives of Nigeria’s oil and gas industry reform has been to create a more efficient state-owned oil company (“SOC”). Government officials have often named the SOCs of Brazil – Petrobras, Norway – Statoil and Malaysia – Petronas, amongst others, as comparator companies on which the restructured national oil company would be modelled. The various drafts of the Petroleum Industry Bill (“PIB”) have proposed different reform alternatives culminating in the structural reform proposed in the Petroleum Industry Bill 2012 (the “Bill”). This article seeks to review the reform structure proposed under the Bill and to critically analyse the choices made.  As our title suggests, it is our view that although several changes have been made, the fundamental issues surrounding the inefficiency of the Nigerian National Petroleum Corporation (“NNPC”) remain untouched and will continue to plague the industry in the immediate future if these reforms are passed into law. END_OF_DOCUMENT_TOKEN_TO_BE_REPLACED

Between the long public holiday weekend and work commitments, we have not been able to post as frequently as we should have done. We apologise for that and will remedy that this week.

Click here for the newly published summary of Part V of the PIB, which deals with downstream petroleum (including domestic gas utilisation). We are also finalising the promised critique of the NNPC reforms and expect to have that published by Friday 24th August. Have a good week.

Read the views of Prof. Assisi Assobie, former Chairman of the stakeholders working group of the Nigeria Extractive Industries Transparency Initiative (NEITI) on corruption and the Petroleum Industry Bill as reported in The Guardian newspaper here. The report is quite short but emphasises what has been commented on by others on the extensive powers granted to the Minister in the PIB.

The Petroleum Industry Bill (PIB) is lauded to be the single most important legislation in Nigeria given our mono-economic set-up,  however ridden with various mutations from the original intervention of the Oil and Gas Implementation Committee (OGIC) inaugurated by the Obasanjo administration in April 2000.

Several versions of the PIB materialized as an outcome and greatly skewed the many efforts in producing a bill that would fundamentally reform an industry lacking significant changes in administration and regulation. Discordant tunes emerged from the various stakeholders, each with self-confessed belief on how the reform agenda would have been carried out. The International Oil Companies, indigenous operators, international independents, regulators and even the minister alike joined in a macabre dance of what a PIB should be and what it should not be.

A sigh of relief may have seemingly arrived with the recent transmission of the bill to the seventh National Assembly. The Special Task Force for Implementation of the PIB, brainchild of the Federal Government’s concerted efforts to deliver on its promise to the nation in aftermath of the subsidy protests, submitted their finished product, a new Petroleum Industry Bill.

The new PIB, without doubt, has agitated the déjà vu trailing previous attempts. Questions answered and unanswered: Is it the much-needed cure to revive an ailing Nigeria’s oil industry? Would this be another stillbirth or is the stage finally set for culmination of the sector reforms. Who is really afraid of the Petroleum Industry Bill?
END_OF_DOCUMENT_TOKEN_TO_BE_REPLACED

The Committee on Petroleum Resources (Downstream) of the House of Representatives today announced its Downstream Stakeholders Forum. The theme is “The Downstream Regime in the Petroleum Industry Bill: Stakeholder’s Perspective”. This is a by invitation only event and will hold on the 2nd of October. This forum is different from the public hearings that will be held by the committee after the second hearing of the PIB. Details of the forum and the relevant contacts can be found here.